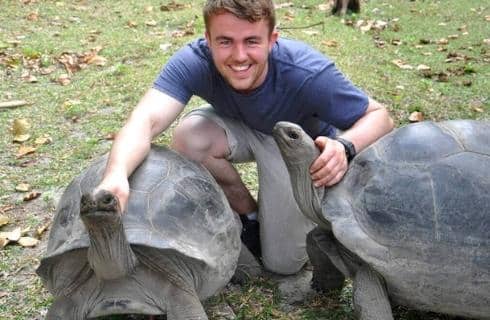 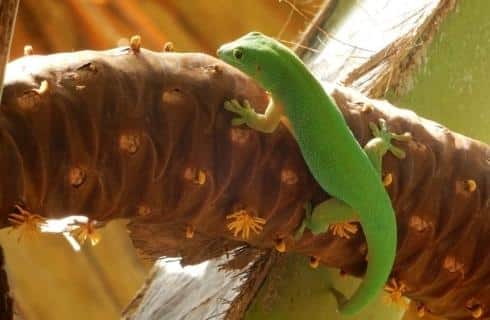 Please Note: This program is temporarily unavailable. Check out our alternative programs in Africa or schedule a one-on-one call with one of our expert volunteer advisors.

Get lost along the white sand beaches or go on a diving adventure while becoming an integral part of the wildlife conservation in this little piece of paradise. Whether you are interested in marine biology or environmental conservation, this volunteer opportunity in Seychelles will prove to be a rewarding experience.

Your Schedule at a Glance (Minimum three-week commitment):

Arrival Day, Saturday: Arrive at Seychelles International Airport (SEZ). on time to make the meeting point at 10:00 AM. Most volunteers choose to arrive at least the day before to settle in, and arrange their own accommodations prior to the start date. At the meeting point you’ll be introduced to the local staff and receive transport to the project.

Day 2, Sunday: Take the time to settle into your new home and get to know the project better.

Days 3-7, Monday-Friday: Your days will be spent conducting research and surveying Curieuse Island. You will use various methods to gain data required to help in the conservation efforts of the species that you are studying, and may also participate in practical tasks such as tagging sharks and running marine education programs for local children.

Days 8-9, Saturday-Sunday: Spend your weekends resting or go island hopping – there are over 100 islands in the archipelago!

Remaining Weeks: The remaining weeks will follow a similar schedule of volunteering Monday-Friday and having most weekends off. Use your free time to sunbathe and snorkel on the island or take a trip to the capital Victoria, to enjoy it’s great cuisine and nightlife. Departures are on a Saturday.

Check out what our past volunteers had to say!

Volunteer Work: Collecting data for research during hiking and snorkeling

Number of Volunteers: Up to 18 international volunteers

Important Note: Equipment: all necessary project equipment provided, there is a ‘kit list’ available post registration which will outline all the essentials that volunteers will need.

Accommodations: Mixed dormitories located on base

Airport Transfers: Transfer from Mahé Island to Base is included

Orientation: All necessary training and introductions provided upon arrival

Seychelles can be best described as one of the world’s paradise destinations. The tropical rainforests, white sand beaches, and pristine water, combined with the tropical climate make the Seychelles irresistible. After exploring the beaches and jungles, Seychelles becomes a great location for bird watching and observing tortoises in their natural habitat. For those with an extra sense of adventure, there is an underwater wonderland with a diverse selection of fish and coral species waiting to be discovered. Different parts of Seychelles also offer a bustling tourist life with hotels, restaurants, and nightlife. With all it has to offer, Seychelles has earned the reputation of being a prime location for eco-tourism and scuba-diving adventures.

The Seychelles Conservation Expedition works to protect the critically endangered colonies of hawksbill turtles, the giant tortoise, the endemic Coco de Mer palm and juvenile lemon sharks. Depending on the season, volunteers are involved in collecting data and census on the population of different species in the area. This is done by carrying out turtle nest surveys on the beaches, shark tagging, mangrove and bird surveys, Coco de Mer monitoring and in-water turtle snorkels. Training for the physically demanding project is quick, allowing for volunteers to be integrated into the field research as soon as possible. During both land and water fieldwork, volunteers have the opportunity to observe some other wonders of the islands, such as giant tortoises.

he work on this project is seasonal. From September to March is turtle season, so volunteers’ work here will be focused on this. During the rest of the year, volunteers will focus more on local fauna and flora surveys and conservation efforts.

April through August: Volunteers will participate in fauna surveys and census research, local endangered flora conservation efforts, and giant tortoise habitat maintenance and restoration, as well as mangrove surveys and Coco de Mer monitoring. The collection of this data serves to protect the endangered population of animals and flora, while aiming to restore the mangrove population after it was destroyed by the 2004 tsunami. From April through to May, you may get involved in Baited Remote Under Water Video surveys (BRUV) to assess the populations of carnivorous and fish species along the remote north shore of Curieuse Island.

September through March: During this time, volunteers will be involved with the above activities, lemon shark tagging, as well as with the research and census of Giant Aldabra tortoise as well as the hawksbill turtle during its nesting season

A typical day starts with breakfast followed by general chores after which volunteers will embark on a challenging day of data research and hiking. Volunteers will explore the diverse terrain of Seychelles while gathering data; though it can be quite physically draining, it is a rewarding task. Be prepared to hike quite a bit over rocky terrain and long stretches of beach.. At the end of the day, volunteers gather for a debriefing while eating and socializing at the base. The volunteers typically have both Saturday and Sunday off to explore the island or head into town.

Internet: There is Internet connection on base however given the remote location it may not be as stable. Volunteers rely on cafes for Internet during their free time on weekends, the nearest being Praslin Island (Approx. 20 minute boat ride away.)

Accommodations: Very basic with shared, mixed-sex dormitories and shared bathrooms/kitchen/social areas. Volunteers work together to keep the place running, taking turns with general chores such as washing, cleaning, and cooking. Toilets are required to use bucket flush system as there is no running water in the lavatories. There is running water in the showers, however shower use is infrequent so as to reserve water for everyone. You will have intermittent generator use and solar power for a few hours each night, enough to charge an iPod or camera batteries. Volunteers with longer stays may want to bring a laptop which can be charged on base.

Besides its stunning beaches, wildlife, and sea life to explore, Seychelles is also a thriving tourist hub. Spend your free time discovering the stunning coral and diverse sea life in one of Seychelles diving expeditions, or head onto one of the main islands for a vast selection of cuisine and nightlife. Seychelles is your doorway to paradise, every day another opportunity to discover something wonderful.

Please note that there is an additional cost for these programs. 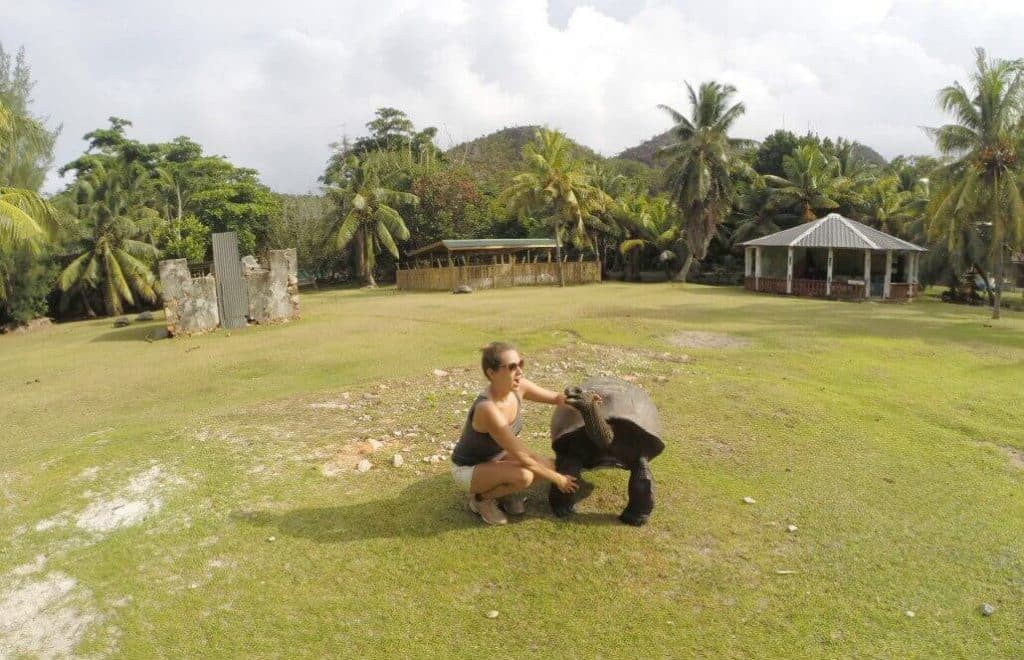 Why did I choose to volunteer in the Seychelles at the Wildlife Conservation Expedition?  Because it is a place far…
Read more 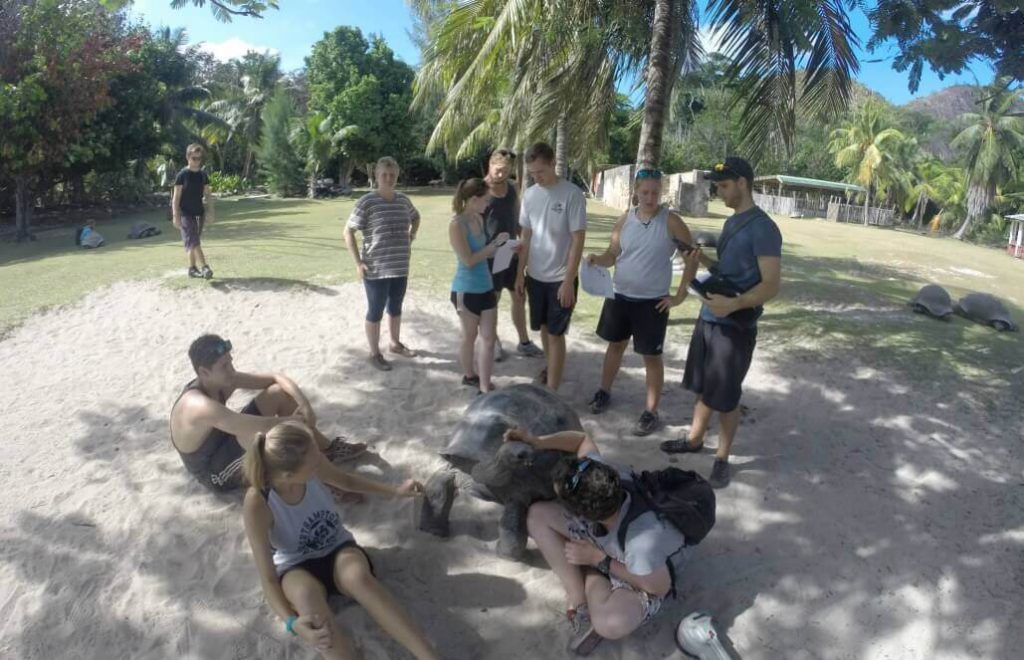 Here is an excerpt of Sarah’s experience:

Nothing will put a smile on your face like when you see baby turtles. We were so fortunate that we…
Read more 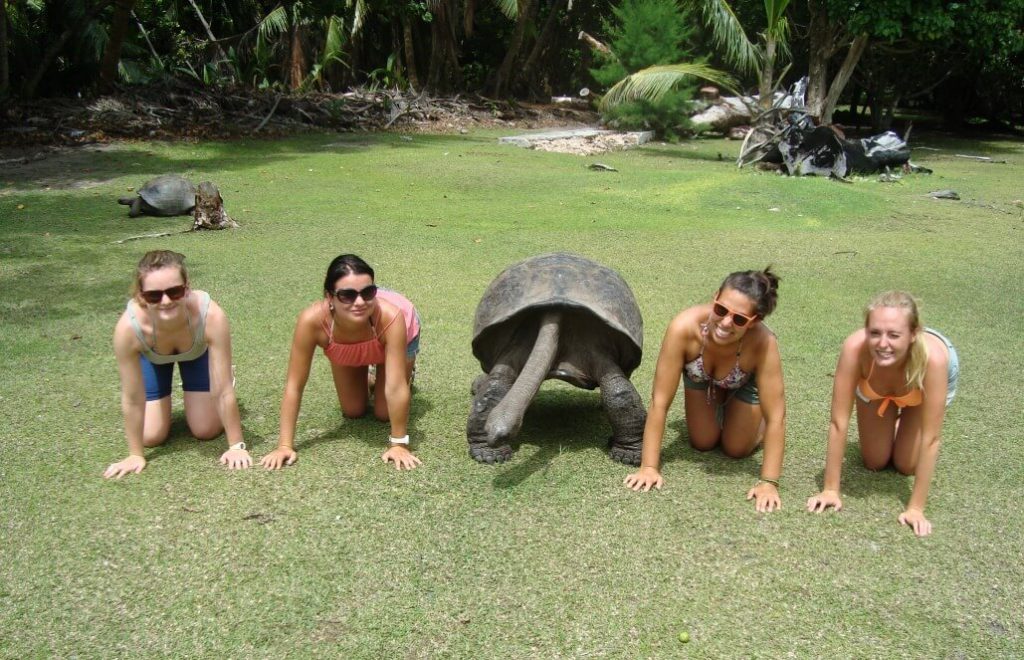 Simply Stunning – Volunteering in Seychelles at the Wildlife Conservation Expedition

Flying over the islands as I reached the Seychelles I couldn’t help but smile, I was about to spend the…
Read more 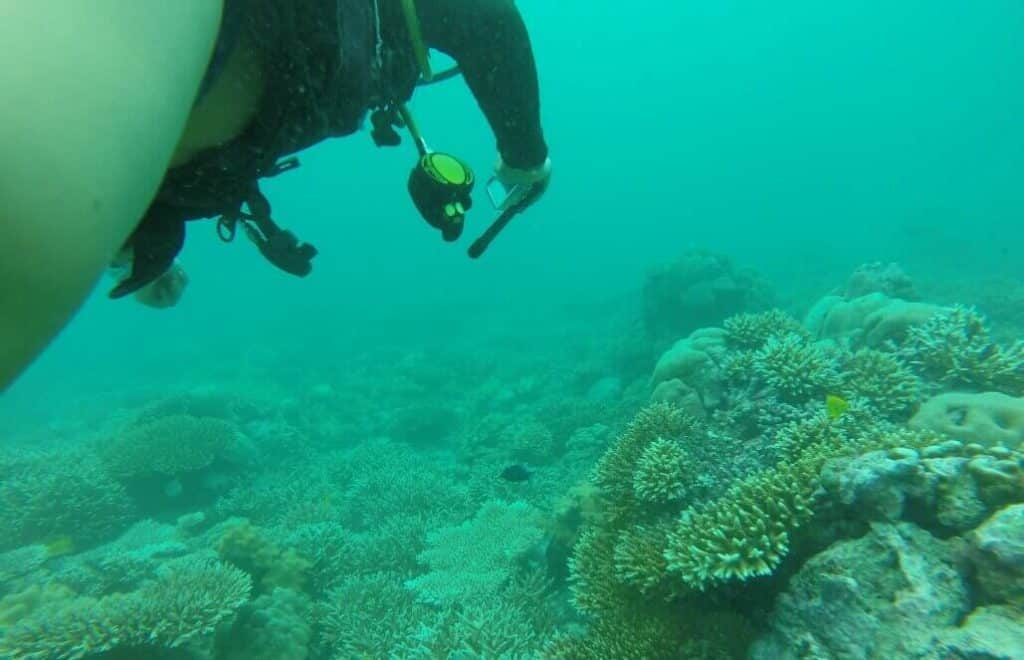 Volunteering in Seychelles – Swimming in Paradise

As summer approaches, the thought that fills most heads is lounging on a sun-lit beach, sipping cocktails and enjoying the…
Read more

Want to join this program?