Island Turtles of the Galápagos

The Galápagos Islands are a chain of volcanic islands off the coast of Ecuador, in South America, most famous for being the home to many giant tortoises and sea turtle populations. The giant tortoises of the Galápagos are among the most famous of the unique fauna of the islands. These islands changed our understanding of the natural world forever. British naturalist Charles Darwin observed numerous local plants and animals during his visit in 1835. Overtime his fascination with these animals developed and he began to wonder if species from South America had reached the Galápagos and then changed as they adapted to new environments. This idea that species could change over time eventually led to Darwin’s infamous theory of evolution by natural selection. 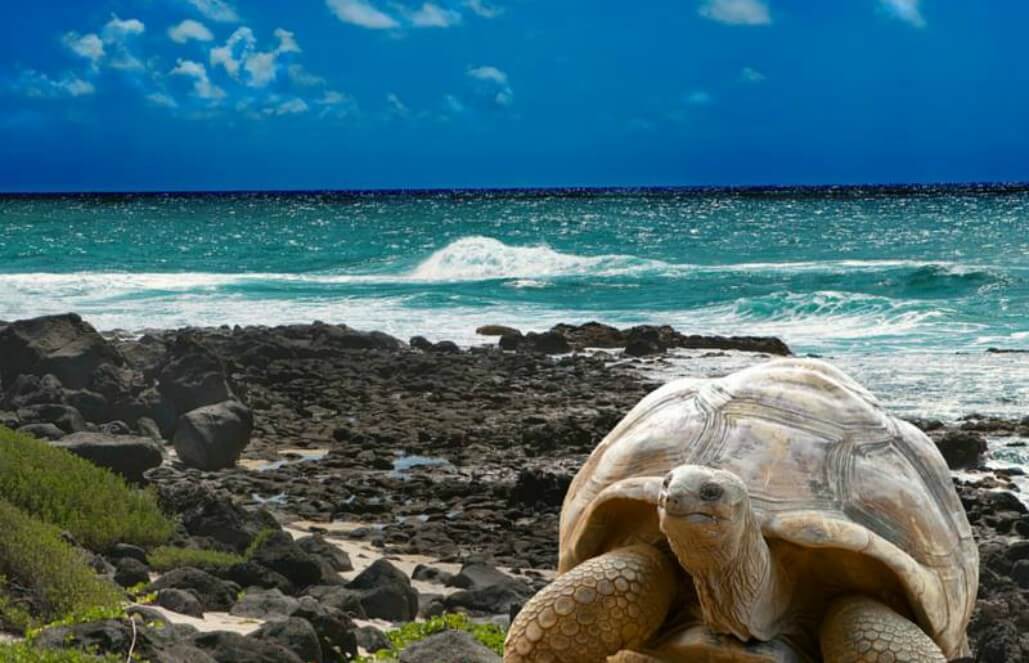 Giant tortoises once inhabited most of the continents of the world and were able to thrive in various environments. Galápagos tortoises represent one of the two remaining wild groups of giant tortoises in the entire world. The other group inhabits Aldabra Atoll in the Indian Ocean. These islands were actually named for their giant tortoises! The old Spanish world “galapago” means saddle. “Galapago” was a term used by the early explorers to describe the tortoises due to the unique shape of their shell. This truly shows the impact that this species has had and continues to have on the Islands in Ecuador.

Research done by scientists suggests that the first tortoises arrived in the Galápagos islands about 2-3 million years ago. It is believed that they traveled about 600 miles from the coast of South American either on their own or on vegetation rafts to eventually arrive at the Galápagos. Initially, they inhabited the easternmost islands of Espanola but soon ventured throughout the archipelago.

There are two different types of tortoises and each type inhabit a different island. These two types of tortoises have very different shell shapes, that have been adapted based on varying feeding habits. These feeding habits are based on local flora. For example, some islands have low arid vegetation while others have high more green lush environments. Saddleback tortoises live on the Pinta Island and have shells that rise in the front just like a saddle. The reason for this structural adaptation is because it allows them to raise their heads high to eat tree cactus and solve disputes over limited food resources. These tortoises developed this adaptation in response to the lack of food during times of drought. One of the main food sources for this type of tortoise is cactus pads which are located higher up off the ground. Another source of their diet that comes from these cacti is prickly pears. This is a type of fruit that grows on cacti in the Galápagos region. These saddleback tortoises resolve the food conflicts by raising their head as high as possible during social interactions. The highest head always wins and the other tortoise retreats with its head lowered towards the ground. The second type of tortoise is dome-shaped. These tortoises live on islands where there is a lot of vegetation that is low to the ground. Due to the location of their food resources, these tortoises do not need to raise their heads to access the food. They live on larger, higher islands where the climate is humid, and the forage is generally abundant and easily accessible. More specifically, the majority of these dome-shaped tortoises live on Isabela island where the vegetation is at ground level. These dome-shaped creatures tend to be much bigger in size and do not have the upward thrust to the front of their carapace.

These turtles have some pretty cool characteristics. Not only are they an iconic animal of the Galápagos, but they can often grow over 6 feet long weighing up to 800 pounds. This makes them one of the biggest tortoises and reptiles on the planet! It is hard to imagine an animal that can get so big just from eating grass, fruits, leaves, and flowers. Galápagos tortoises can live well over 100 years in the wild. The oldest recorded is said to have been at least 170 years. These giant creatures can also go very long periods of time without any food or water. Their ability to survive without any food or water for extended periods of time will be covered later on with more detail when the eventual demise of the tortoises is discussed. 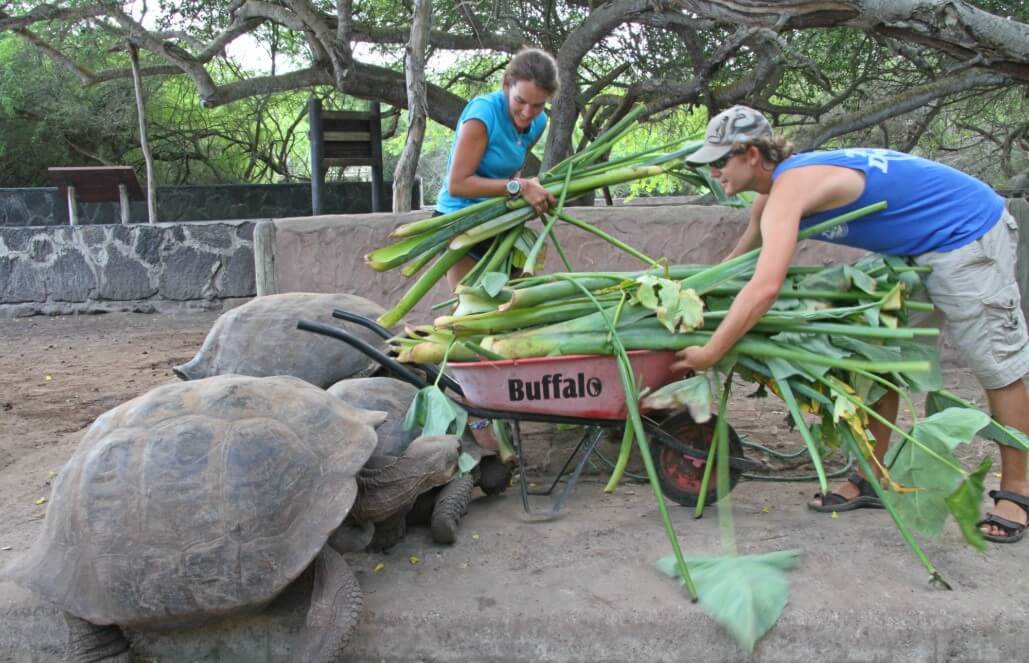 Of all the native species on the Galápagos giant tortoise populations were the most devastated after the rice endemic rats which are now almost extinct. Despite harsh circumstances, the species was able to prevail due to their ability to survive without food or water for up to a year. Sadly, this amazing adaptation actually contributed to their eventual demise. Once voyagers and whalers discovered this adaptation they used it to their advantage by storing live giant tortoises on their ships. This enabled them to have fresh meat for long journeys without needing to feed the animals. After this discovery, the massive exploitation of the species began. This exploitation carried on for years and year after year the species endured a major loss in their population.

Years later the tortoise exploitation by humans continued during the California gold rush. As sailors made their journey to California, typical ocean routes brought passengers to the Galápagos Islands. Like the whalers and voyagers before them, they took advantage of the tortoises as they were easy to capture and provided an abundance of meat for their long journeys. Not only were the tortoises very easy to capture, but they were also high in number at this time and very tasty to eat. As vessels passed the islands they would stop and capture large numbers of tortoises to bring along with them to consume either on their trek or once they arrived in California. One example of many describes the schooner Roe arriving in San Francisco in 1851 with over 25,000 pounds of terrapin from the Galápagos.

Over time, tortoises have been exploited for various reasons. One of the ways in which they were exploited for their oil which was used to light lamps. After two centuries of exploitation, the tortoises experienced a loss of about 100,000 to 200,000 tortoises. This is especially saddening because the Galápagos tortoise has no natural predators, so this sharp decrease in the species is a direct result of human exploitation. While older tortoises have no natural predators, baby tortoises face many threats. Newly introduced dogs, pigs, goats, rats, and cattle that are not native to the region threaten their eggs and eat their food supply. Three species have been extinct for some time, and a fourth species lost its last member, Lonesome George, in June of 2012. It is estimated that only 15,000 wild tortoises live on the islands today. 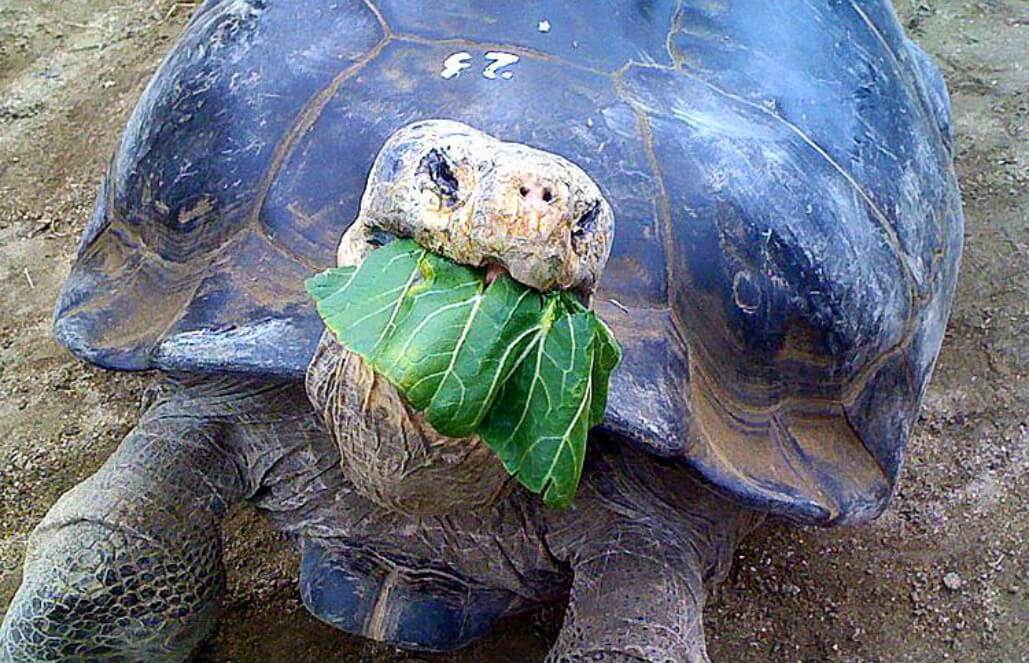 The conservation status of the Galápagos tortoise is currently listed as vulnerable. This is why many zoos and organizations have been captivating these tortoises and putting them in breeding programs to increase the population. It is easy to see why this is necessary to increase the population size, but like any wild animal, these tortoises belong outside free in their natural habitat. That is why programs like the “Giant Tortoise and Sea Turtle Conservation in the Galápagos” exists so people with good intentions can contribute to preserving this species in their natural habitat. This program is a perfect opportunity that enables volunteers to see this amazing animal in its own natural environment.

After hearing so much about this amazingly adaptable species who would not want the chance to visit the Galápagos to actually see them in person? Volunteers have the opportunity to see firsthand what Charles Darwin saw so many years ago and help these ancient giant tortoises maintain their existence. At this program, not only do participants directly care for and feed the giant tortoises, but they can help preserve and develop the wildlife in the area through sea turtle hatchling monitoring and care. There is so much to see on these exotic Islands with diverse flora and fauna around every corner. Check out some of the most beautiful natural locations on the islands like Darwin Lake, Tagus Cove, and Tortuga Bay while dedicating your time to conserving this indigenous species. If you find these giant tortoises as cool as Darwin did then take advantage of this opportunity to work closely with these magnificent creatures while enjoying the tropical islands of the Galápagos.